Technology has been shown to be effective in the HAVC system of buildings, saving energy consumption spent in air conditioning and reducing CO2 emissions

Design of the building being built at the Polytechnic School of the University of São Paulo. Image by Aflalo & Gasperini (USP/Divulgação)

An unprecedented achievement in the country, a building using energy from the ground to heat the environments is being built in the city of São Paulo. The project is the sequence of an innovative study carried out by USP, at the São Carlos School of Engineering (EESC) that has analyzed the use of foundations as a means of exchanging thermal energy between the building and the underground.

CICS Living Lab, the building will be the headquarters for the Center for Innovation in Sustainable Construction (CICS), at the Polytechnical School of USP, and will serve as a living laboratory to test advanced and sustainable technologies in civil construction.

The geothermal system – which uses energy found within the earth's crust, whether in soil, rocks or even water – is one of the fastest growing models of renewable energy generation in the world. It has been applied for at least 20 years in the United States and in European countries. However, it had never been studied for implementation in Brazil since the country has different soil and climate from those places. It was Thaise Morais, researcher from the EESC's Geotechnics Department, in her PhD thesis, who assessed for the first time the performance of this technology under Brazilian conditions.

In short, this is how the system works: through buried piles, which make are part of the very foundation of the building, it collects or rejects heat from the ground.

Then, with the help of some fluid (drinking water was used in the tests), the tubes installed inside carry this energy to the surface, where a geothermal pump exchanges heat between the underground and the environments in the building. “This exchange is carried out continuously and repetitively until the desired temperature for the environment is reached”, explains Thaise. 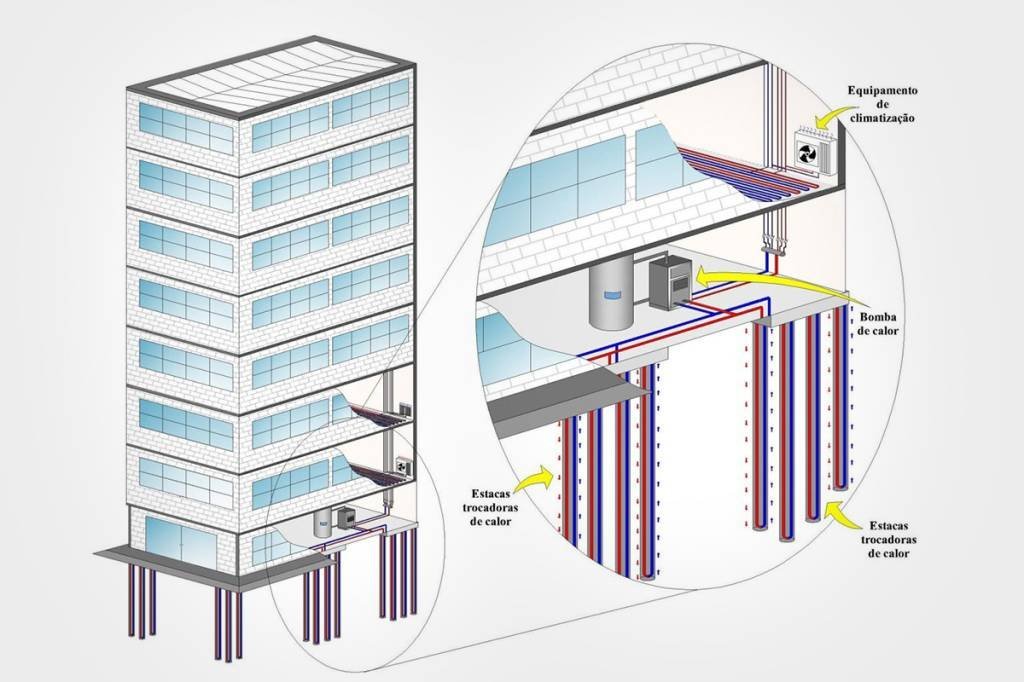 Through piles buried on the ground that are part of its own foundation, the system collects or rejects heat from the ground (USP/Divulgação)

According to the researcher, international experience has shown that the model is efficient and successful in heating or cooling places and reducing energy consumption. “The use of these structures has been encouraged in Europe by governments in order to reduce costs and emission of carbon dioxide”, she says.

For the same reasons, the expectation around here is that this will be an alternative to traditional HVAC systems, since the use of air conditioning is only growing in the country. Data from the Ministry of Mines and Energy show that only between the years 2005 and 2017, in the residential sector, the ownership of these devices has doubled. And the estimate is that the number of installed devices will increase from the current 30 million to 165 million by 2050, according to the study The Future of Cooling, by the International Energy Agency (IEA).

The implementation of the geothermal system does not have a defined cost in Brazil for now. However, it is certain that, in the long term, the investment is offset by savings in electricity costs.
According to Thaise, the technology can be applied in any type of building, but she emphasizes that there are no standard results. Before implementation, it will be necessary to study the thermal properties of the site’s subsoil and evaluate the climate conditions and the building's demand. “Brazil is a country of continental dimension that presents average annual temperatures that vary according to the region. Therefore, the efficiency of this system should also vary regionally.”

The researcher's pioneering spirit was recognized by the Brazilian Association of Soil Mechanics and Geotechnical Engineering. Her thesis won the Costa Nunes Award as the best doctoral thesis of the 2018-2019 period, competing with academics from all over the country.

“In addition to the importance of my work, the victory also goes to promoting innovation and relevance of implementing this type of system in Brazil. We are on the right path”, celebrates the researcher.

The building built at USP, which is an offshoot of her studies, is financed by CICS, an ecosystem with representatives from companies and faculty dedicated to accelerating innovation, sustainability, and productivity in civil construction. The works are not yet expected to be completed, as they have been interrupted by the COVID-19 pandemic.

Carbon emissions are among all boards priorities